Full Panel Test at the cost of a single board test 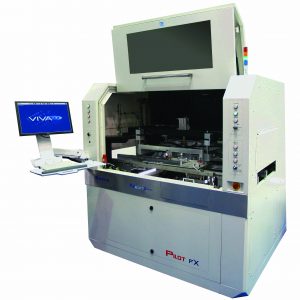 Pilot FX Next> Series is the right compromise in productivity and flexibility, designed specifically to test panels. Thanks to an its revolutionary mechanical architecture, the system optimizes and shares test resources, including special, often costly, instrumentation.
Pilot FX Next> Series is not only about resource optimization, or innovation (there is nothing similar on the market today) or automating test; it is, above all, a breakthrough in the test philosophy.

A “flying” bed of nails for panels

Pilot FX Next> Series system provides the capability to share test resources, moving a small, low-cost fixture from one board to another, effectively eliminating the need to duplicate them in the system.
The mechanical architecture of the system allows the test head, which carries the fixture, to rotate in order to accommodate any configuration of panel layout, and the Pilot FX Next> Series is fully implementable in an automated production line, making it an innovative and efficient part of the process.
The Pilot FX Next> Series system features all of the core performances and benefits of the Seica VIP test platform, including hardware and software scalability.

The Pilot FX Next> Series uses a state-of-the-art color camera which, in addition to fiducial centering, is able to acquire the serial number of each single board within the panel. An integrated marker is available to mark the tested boards, according to user-defined rules. Thanks to Seica’s wide experience in high-volume production test, the VIVA test software is able to communicate with external databases, enabling full integration of the Pilot4D FX system into the user’s own production management environment.

Scalability
The Pilot FX Next> Series has a 19’’ rack for the integration of external instrumentation, ensuring resource scalability for new applications.
The integration of dedicated OBP programming modules, sensors for LED test applications, Boundary Scan test, and communication management via standard protocols (for example: CAN BUS, LIN), are only some of the possible capabilities that can be implemented.

Any cookies that may not be particularly necessary for the website to function and is used specifically to collect user personal data via analytics, ads, other embedded contents are termed as non-necessary cookies. It is mandatory to procure user consent prior to running these cookies on your website.